The Sports Gene: Finding What Matters And What You Can Change

Last week, Edison held its annual CEO Summit at the Water Club in Atlantic City. With over 90 attendees, we spent three days engrossed in provocative keynote speakers, several tactical “sausage making” sessions led by CEOs and, of course, our signature poker tournament along with and tons of networking. Check out some highlights if you weren’t able to join us.

I was blown away by our kick-off keynote speaker, David Epstein, author of best-selling book The Sports Gene, Inside the Science of Extraordinary Athletic Performance. The discussion described the ascension of top athletes, with an attempt to identify patterns of success. Epstein attempts to address the longstanding question of nature vs. nurture.

So, you might ask, why is the least athletic person on the Edison team covering this topic? Because, I found the discussion to be particularly provocative. While the topic was about sports, it really centered on human achievement.  Many of the Epstein’s observations on athletic performance have strong parallels in the business context.

Here are the five takeaways we learned from David Epstein:

Epstein underscored that giant chasm between first and second place. For example, the world’s fastest runner in the 100 meter race reaps all the fame, while the second fastest, who is 0.5% slower, is anonymous in his own country. The third fastest runner is a part-time roofer.

The parallel with the tech company ecosystem is profound. The valuation of the market leader, relative to the next two to three contenders, is clearly not linear. Best of breed always gets the highest valuation multiples and sets the benchmark for others in the peer group.

The same holds true for the venture/growth investing universe. Most LPs flock to “top quartile” investment managers because history has proven that the top ranked investors generate meaningfully better returns than peers over the long run.

Indeed, the world has gotten substantially more competitive; the margins between good and great are small and quite meaningful.  Building market leadership is critical to ultimate value creation.


Not All Practice is Created Equal

We all know the importance of practice… However, not all practice is created equal. Epstein underscores the importance of “deliberate practice” – the kind of practice that focuses on improving your weakest areas, rather than reinforcing strengths. Successful athletes develop strong relationships with coaches and teammates and acknowledge that weakness finding is vital to accelerating your development. Epstein noted that the Navy Seals – in a high trust team environment – have been successful elevating team performance.

So, in a business context, have you created a culture which encourages collaborative improvement? Have you built a level of trust and comradery with your leadership team to encourage this kind of professional development? 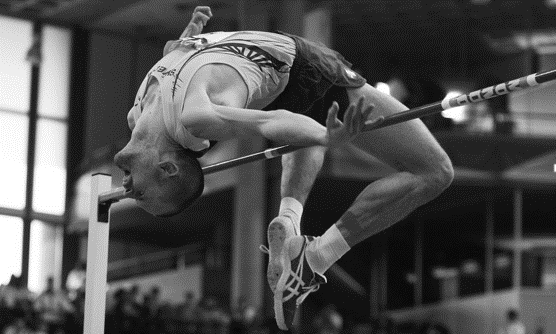 While Epstein acknowledged how practice and repetition are vital to mastery, he notes individuals learn at different rates. Malcolm Gladwell, in Outliers, advanced the notion that 10k hours of practice was fundamental to mastery of a skill. Epstein disagrees with the specific threshold – some become expert in 3,000 hours, others in 25,000. He suggested we change the rule of thumb to the 10,000 hours ± 10,000 hour rule.

He illustrated the tail of two high jumpers. Stefan Holm and Donald Thomas.  Stefan was a “Tiger-esque” story: became totally obsessed with the sport, father was hard-charging mentor, developed perfect form, practiced incessantly to improve 1 cm a year for 20 straight years until he became the Olympic champion.  Stefan was only 5’4” and developed a hardened Achilles tendon due to so many hours of practice.  Donald, on the other hand, stumbled upon high jumping due to a bet with a college buddy. Don was 6 inches taller with a longer Achilles tendon. He had lousy form, but after very little practice showed up to the Olympics, and beat Stefan.

The reason why Don prevailed wasn’t because nature trumps nurture.  Rather, his learning rate was substantialy faster.

Perhaps the most inspiring vignette Epstein shared was of his own personal story.  He was a walk-on 800 meter runner at Colombia University.  He boasted that he was a really low baseline, with aerobic capacity of the earliest stage emphysema. However, with substantial practice, a kick ass mentor and self-regulated, maniacal focus on improving weaknesses, he eventually ended up winning.  Again, David’s rate of learning was dramatic, and offset what some might argue as daunting physical (nature) impediments.

Vision of Future Self

The greatest athletes (and leaders) all understand that setbacks are merely part of the journey. Leaders must embrace them and not run from them.

David recommended that leaders, or anyone who wants to improve, to constantly be asking themselves these questions:

David said he does this every month. At first he was sure each month his answers would be the same. But he has been pretty surprised to see how much the answers actually change from month to month.

Successful leaders must visualize the future and constantly measure progress toward the goal.

David talked about talent identification from a sports/coaching perspective and how it can be applied to new recruits. Do you hire the most experienced, most specialized “hedgehog,” or a “fox” with broader experience, and flexible, savvy mindset? This resonated with the theme of the event “Strategic Agility.”

David noted that performers who join Cirque du Soleil are required to learn other disciplines. Their performers must become foxes.  This rotation assists in them driving new, creative content.  Similarly, prominent musicians didn’t typically specialize in a single instrument early on.  Rather, the, most exceptional musicians break out with their third instrument, bringing their diversity of experience to the table.

Epstein concluded that talent identification is particularly hard. The punchline was that finding people that have diversity of experience, who have demonstrated ability to learn fast, tend to outperform the specialist.

As we think about recruiting talent at Edison, we often find ourselves trying to marry both fox and hedgehog concepts. We typically look for executives who have demonstrated functional competence along with experience working with hyper-growth businesses that have successfully scaled.


Focus on Variables That Matter

David gave the example of a shotputter. How does one shotputter have an advantage over another if they're physically the same size? It comes down to three determinants of performance: release velocity, release height, and release angle.

A thrower can change the angle of the release by even 1 degree and can win. He wasn't necessarily stronger, he just focused on the variable that mattered in order to win. More importantly, the variable that is changeable--the angle.

He closed with the following quote by J.M. Tanner:

"Everyone has a different genotype. Therefore, for optimal development, everyone should have a different environment."

David definitely dispelled many of our perceptions about why top athletes excel. I thought his perspective on talent acquisition, goal setting, approach towards managing setbacks, and deliberate practice/improvement are all valuable business lessons. Do you agree?

Prior to joining ProPublica, David was a senior writer at Sports Illustrated, where he co-authored the 2009 report that Yankees third baseman Alex Rodriguez had used steroids. His science writing has won a number of awards, including the 2010 Society of Professional Journalists prize for science reporting for a story on the genetics of athletic performance. (He is author of the New York Times bestseller, The Sports Gene). He was a 2011 Livingston Award finalist for stories on perceptual skills and pain in sports. Prior to SI, David was a crime reporter at the New York Daily News and a reporter at Inside Higher Ed. He has master’s degrees in environmental science and journalism from Columbia University, and has lived in the Sonoran desert, on a ship in the Pacific Ocean, and in the Arctic.

Edison’s 12th exit in the last 12 months; sets a record for