Does the American Dream Still Matter? 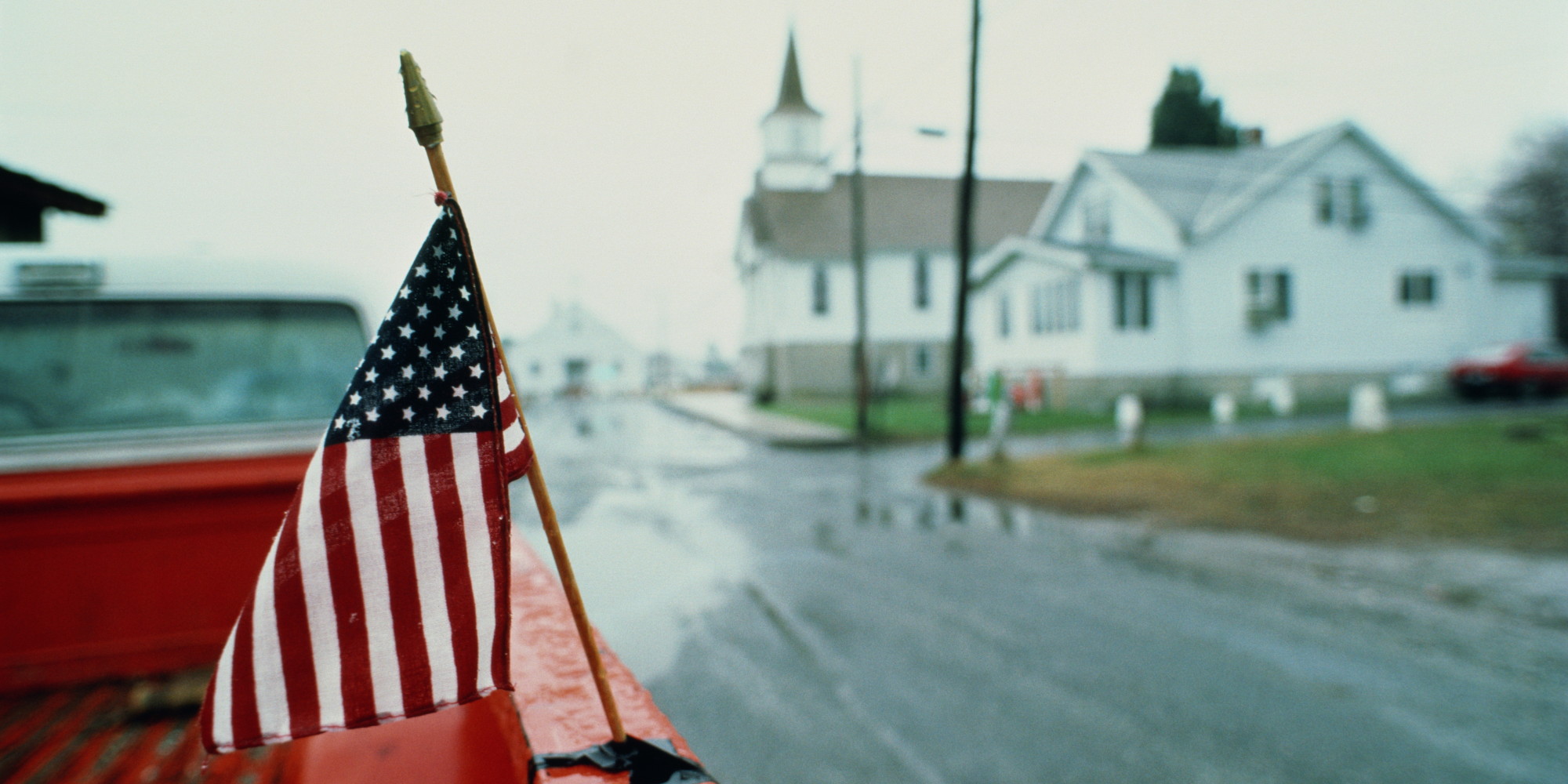 For our 31st Annual Meeting last month, we wanted to continue this discussion in a way that would be meaningful and compelling for our Limited Partners, CEOs and Board Members. While we explicitly aimed to avoid politics, the topic of the American Dream is clearly political by its very premise. So, having both conservative and liberal views represented was important to achieving balance, while also keeping things "interesting."

We landed on two experts who view this topic through very different lenses: Professor Abdelal, our HBS professor, and William Bennett, former Secretary of Education under President Reagan and Drug Czar under President George H.W. Bush.

It was my pleasure and honor to discuss the importance of the American Dream with these two academic and policy leaders.

The American Dream: What is It? Does the Dream Mean Something Completely Different Today?

The American Dream was first introduced by author/historian James Truslow Adams in 1931. The Great Depression had taken its toll and many were questioning the great American Experiment. In Adams’ book, The Epic of America, he defines His American Dream as:

"That dream of a land in which life should be better and richer and fuller for everyone, with opportunity for each according to ability or achievement. It is a difficult dream for the European upper classes to interpret adequately, and too many of us ourselves have grown weary and mistrustful of it. It is not a dream of motor cars and high wages merely, but a dream of social order in which each man and each woman shall be able to attain to the fullest stature of which they are innately capable, and be recognized by others for what they are, regardless of the fortuitous circumstances of birth or position.”

With the unsettled feeling we have in the U.S. today, it seems Adams hit the nail on the head. It also seems we should remind ourselves how fortunate we are to craft our own dream.

Mr. Bennett’s view as to what the Dream is was interesting, making the point that, “All nations have gates, when the gates are open, do people run in or out?" "In America," he continued, “they run in.” Professor Abdelal noted “The Dream is a story of meritocracy, that each generation should and can do better than the last.” The original definition by Adams seems to hold (although paraphrased) uniquely by our panelists.

While we can all acknowledge that cultural values have evolved in the U.S., Bennett asserted that the basic premise of hard work is a requirement and core to the Dream. This was the first time we ventured into what may have been controversial territory, but there was agreement between our panelists that a culture of entitlement compromises the American Dream. (I took the high road rather than ask our panelists whether entitlement had set in.) We can look back to Adams’ original definition, where he mentions European upper classes unable to appreciate the dream, to see why this is important.

Is the American Dream Still Possible?

If we think about upward mobility or surpassing our parents or prior generations, one can argue the Dream may be on life support. The Equality Project (a joint research effort between Stanford and Harvard) recently published data on upward mobility, and the results are disturbing. Professor Abdelal pointed out that children born in the 1980s have a just a 50/50 chance of surpassing their parents from an economic perspective. If you were born in the 1940s, the chances were 92%. Each decade, the odds have been going the wrong way. 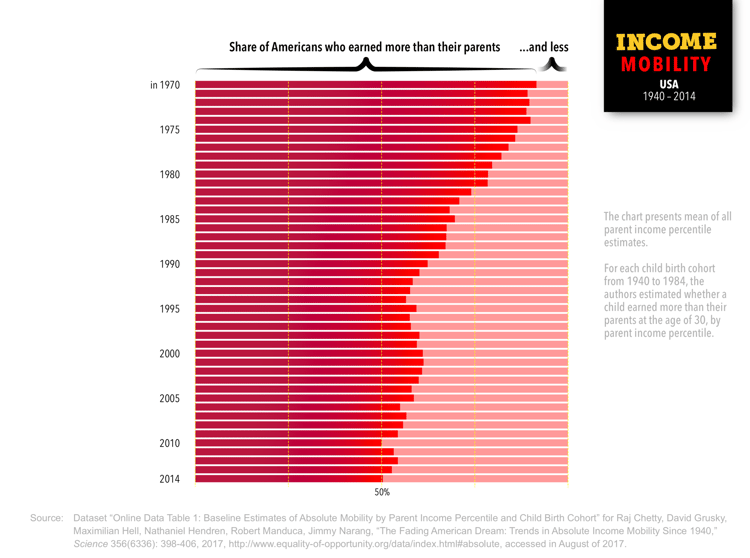 Bennett believes that the American Dream starts with education. Sadly, many other countries have implemented what U.S. researchers have documented about educating our kids, but for some reason, we don’t follow our own best thinking. He commented, “we don’t teach kids to learn, we teach them how to learn,” and went on to point out that “U.S. 3rd graders rank in the 70th percentile of the world; and by 8th grade, they drop to 50th percentile; and by high school, our kids are in the bottom third.”

Some sobering realizations, for sure.

Abdelal countered that he is concerned that education and, therefore, the American Dream is under attack due to “class.” The rich go to the best schools, have a place to study, etc. In addition, he notes that property taxes, as the income source for education, is uniquely American. He pointed out the natural challenges with this framework. 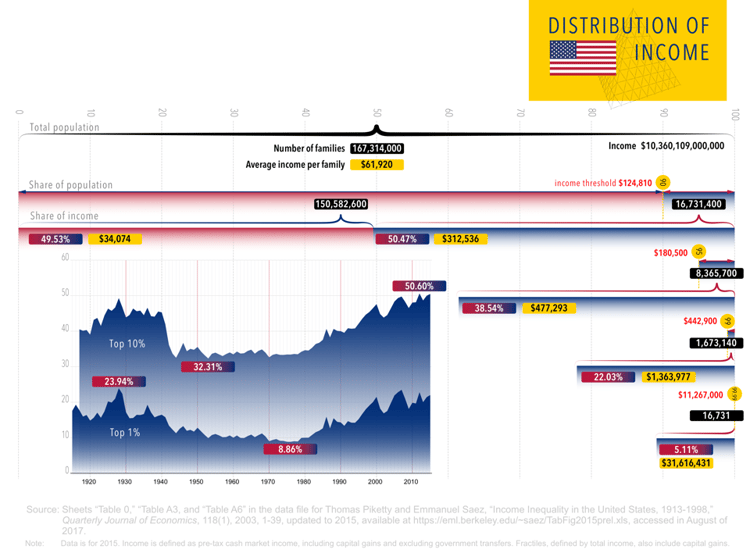 We did not conclude that the American Dream is dead, but we surfaced its major challenges. What I found most interesting was the lack of disagreement from two very different political perspectives. We heard near complete agreement that education is the key, and that public and private partnerships are critical to ensuring the Dream remains within reach.

In that order, these people had a 95% better chance of living 2X above the poverty level, and 71% made it to the middle or high end of income distribution. Tough social issues to discuss in the workplace, but critical ones to the viability of The American Dream.

Is the American Dream Important; Does It Still Matter?

A simple, straightforward question, right? Maybe, but given the current climate where we have trouble agreeing on anything, this seemed a worthy question. I was both surprised and thrilled with Mr. Bennett and Professor Abdelal’s answers.

First, our esteemed Professor, who, believe it or not, admittedly comes from the Academy where “reverse snobbery” happens. He explained that professors of the Arts & Sciences make fun of, or “look down on,” Business School faculty. In other words, the B-School faculty isn’t at the same level as those from the liberal arts side of the Academy. Ponder that for a moment.

Abdelal went on to say, “[the American Dream] is incredibly important.” He worries about the polarization in America and that radical solutions to our most basic issues come from this “retreating to our corners” mentality.

Bennett brought a perspective to this question that was both eye-opening and scary at the same time. He described the story of L.A. high school math teacher Jaime Escalante. If you are the same age as me, you remember the movie Stand & Deliver . The idea that a high school teacher would be run out of teaching for challenging the system and raising the bar for his fellow teachers is the scary part. The eye-opening part is the point Bennett was making. The kids who wanted to be pushed were the real story. Escalante was run out of teaching because kids wanted to be better. The point Bennett was making was pretty simple: everyone wants to improve and do better than their parents. Unfortunately, the “system” doesn’t always support the goals of those it is set up to help achieve.

My view: The American Dream is color blind; it doesn’t care what religion you practice or what gender you are. The American Dream is a vital part of what makes the United States of America. We all want our children to do better than us -- whatever your definition of “better” is. If we no longer think the Dream is viable, we risk losing what makes the great American Experiment so special. As Reagan called it, “the shining city on the hill.”

We all need to pick our heads up to see the world around us. I am thankful that our CEO Summit at HBS and this discussion at our Annual Meeting gave so many a chance to consider some pretty profound and important questions.

And I will sign off with three more provocative questions that came from our panelists. Caution (flashing Yellow or Red): These will force some real thinking and challenge your personal biases.

1. “Of course, you can study the impact on culture of a random religion, but let’s be clear, the skills you will leave college with will not be marketable to 99% of employers."

Q: While it is great to have dreams, and admirable (and a privilege) to pursue studies in whatever it is that may be of interest, should schools, parents, counselors and others be guiding young people based on this reality?

2. Success Academy is arguably the most successful Charter School in New York City. Students are outperforming the rest of NYC’s students across the board.

Q: Why is Eva Moskowitz, Founder of NYC-based Success Academy, Charter Schools’ public enemy #1 for teacher unions, rather than someone we are heralding as a model for urban teaching and improving student  results?

3. Student debt piles up. College grads are unable to get jobs. Skills learned in school are not always applicable to “real world jobs.”

Q:  Should colleges and universities that take Federal money be forced to disclose their results? 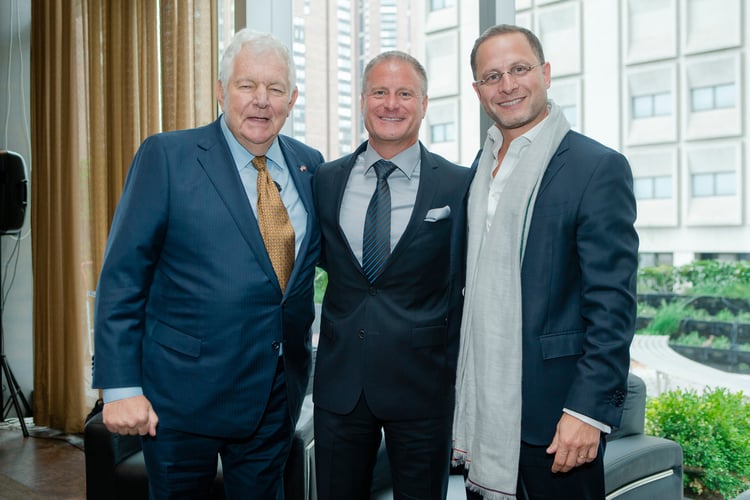 Why We Invested: Solutions by Text

My partners Kelly Ford, Chris Sugden and I are excited to

New capital and Chief Executive to accelerate growth and